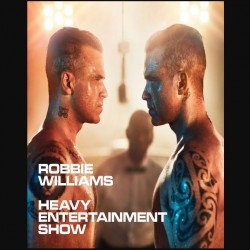 Williams' big pop comeback is filled with glam rock or orchestral showtunes. The album's concept came from Williams recalling his youth, when light entertainment shows had the power to unite millions of people all watching the same thing together.
"Love My Life", which Williams hopes might pull off a similar trick to Angels, is earnest 90s piano balladry with self-help lyrics so banal it could have featured on, of all things, a Gary Barlow solo album ("I love my life / I am powerful / I am beautiful / I am me")
The Heavy Entertainment Show tracklisting:
1. The Heavy Entertainment Show
2. Party Like a Russian
3. Mixed Signals
4. Love My Life
5. Best Intentions
6. David's Song
7. I don't want to hurt you
8. Marry Me
9. Pretty Woman
10. Sensational
11. Sensitive
12. Time on Earth
13. When you know