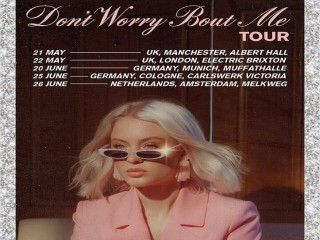 "Don't worry bout me" is Zara Larsson's new single that just arrived. She's also revealed that there will be a small tour that goes along with the single including dates in Munich, Amsterdam and London, as seen in the picture bellow.

As announced last week, Zara Larsson dropped her brand new single "Don't worry bout me". The track comes out four months after her latest release "Ruin my life" and it follows the same thematic, as she sings about a breakup, the one that actually gives her a good point in her life to just move on and leave behind the person that no longer interests her.

The 21-year-old drives the point home on the catchy chorus. "Don't worry bout me, you should worry bout you," Zara pouts. "Keep doing what you do best, babe — that’s loving only yourself, babe."

Listen below to Zara’s single produced by The Struts and co-written with Tove Lo.