A rare copy of love songs from Ed Sheeran titled "Spinning Man" is up for sale in September. The auctioneers predict the CD will sell for around Â£10,000. 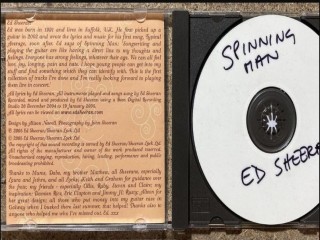 A rare copy of love songs from Ed Sheeran titled "Spinning Man" is up for sale in September. Being claimed as a lost CD from when he was 13, the record is the very last copy from 20 copies he has made back in 2004. In his book, Ed Sheeran: A Visual Journey, the singer revealed that he wrote the collection of songs after his first love, Claire, broke his heart. "In 2004, I made my very first album, Spinning Man, named after a picture that my dad had," he said. Ed also shared that he burnt the CDs himself.

Ed said: "There are probably 20 copies of Spinning Man in existence, and I have 19 of them. I don't want anyone else to get hold of a copy! Most of the songs were about a girl called Claire. She was my first love when I was 13."

Omega Auctions predicts the CD will sell for around £10,000.