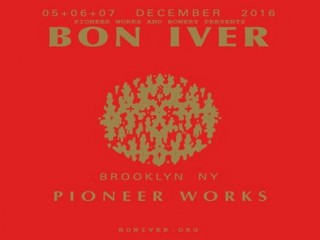 Pioneer Works is a non-profit foundation that fosters multidisciplinary creativity in the arts and sciences, and indie folk band Bon Iver has recently announced they are having 3 unique shows for the foundation at Red Hook, Brooklyn.

At the same time, they announced that tickets are available with an unique code, that can only be obtained while registering through band’s website - http://boniver.org/me.