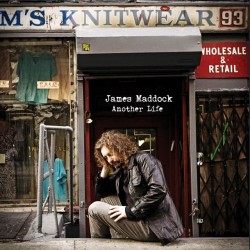 The 52-year old British singer James Maddock which now lives in new york, has released his 2013 album titled "Another Life". "I want to find a truth that resonates", Maddock says of his new work, and we are better for his efforts. While Another Life, which is a collection of pop gems, luscious ballads, and rootsy Americana, is not entirely autobiographical, its arrangements and overall execution feel so intimate that it functions as such. The album arrived via Julian Records and includes a number of 13 tracks: 1. Another Life 2. Arizona Girl 3. Timing's Everything 4. I've Been There Too 5. That's Heavy 6. Leicestershine Mist 7. Easy to Give 8. Don't Go Lonely 9. What Have I Done? 10. Strategies for Life 11. Better on My Own 12. If I Had a Son 13. Making Memories